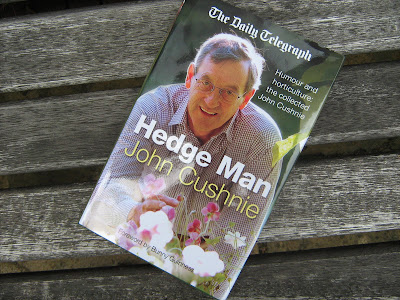 I never read the late John Cushnie's gardening column in The Telegraph, so I couldn't resist the offer of a review copy of Hedge Man, a 'best of' volume from the publisher last year :)

It's a surprisingly thin volume (at 198 pages) for someone who was renowned for his mastery of words, but what's there is a treasure trove. I've discovered a man who had a marvellously dry sense of humour and an economy with words which still manages to be detailed. I particularly love the first couple of sentences from the first entry entitled Talking sheds:

There are a lot of things that a gardener needs, but the two most important are patience and a shed. Patience will make you a better gardener, but a shed will allow you to make a better garden.

I can imagine many of you are yelling what about a greenhouse? at this right now, but it only serves to illustrate another gift Cushnie possessed: the ability to make you think as well as chuckle, even when writing about some of the more mundane aspects of gardening.

Most of the entries sit firmly in the 'How To' camp, indeed the longest sub-division of the book is called Practical Cushnie. There's plenty more in this line to be found in the Plants and Cushnie Design sections too. However, all this practicality doesn't result in a dull book as humour and a lightness of touch win the day. It's a dippable or devour in one sitting kind of volume, depending on your mood.

The final section is called Cushnie comment and comprises two of his New Year Resolution (NYR) articles for 2007 and 2010. I'm rather concerned about the 2007 one as it hardly deals with NYRs at all: instead he muses on changes to Gardeners' World (it seems some things never change!) and what he'd like to see at Chelsea in 2005. This latter piece is a little confusing in view of the main title and did make me wonder if some of the articles are made up from a number of original entries.

I believe the 2010 NYRs should have been the book's final article instead of the penultimate one. Sadly Cushnie died before 2010 commenced and so didn't even have the chance to start on them. Surely they would have been a more fitting final tribute than the confusing 2007 entry and would leave us pondering on how the garden's looking now? It'd be a good call to action for us all as well - get going on all those dreamed of projects and ideas before it's too late.

Apart from that minor gripe (and the relatively thin volume), it's a very enjoyable read.

And for those of you wanting to know more about the man, here's the award winning Gardeners' Question Time John Cushnie tribute broadcast from last year.
Posted by VP at 11:55

I've not listened to Gardener's Question Time anywhere near as much since John Cushnie died.

He had a great sense of humour. His responses on GQT were always good value!