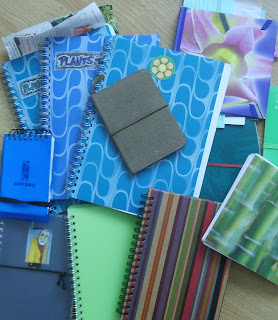 It's not just printed books I'm a bit over-stocked with.
I have recently realised that I have quite a few notebooks - not all of which are in the photo.
And I still didn’t find the one I’m looking for.
.
Posted by The Garden Monkey at 20:57 5 comments:

The more eagle-eyed amongst you will have noticed a new Flange member, blogger and fellow garden book enthusiast.

Coming with the advent of autumn this is very exciting news.

I am off to lay in a good supply of seasoned logs, stilton and port (I actually typed that as pot - not a bad idea, but not conducive to reading) ready for long winter's nights filled with wonderful reading.
Posted by The Garden Monkey at 20:53 4 comments: 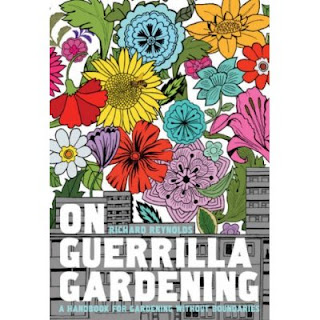 I suspect Richard Reynolds would be a formidable opponent at Risk. His - is it too early to use the term ‘cult book’ yet? - On Guerrilla Gardening is certainly a valuable vade mecum for anybody interested in illicitly improving the local landscape, but it also contains the kind of tactical and strategic savvy that you normally associate with a Garry Kasparov or a Ferdinand Foch.

Indeed, while growing things is at the heart of what Reynolds is writing about (“politics and sustainability aside, the reason I became a guerrilla gardening is because I love gardening”), there is a very strong emphasis placed on the ‘guerrilla’ aspect of his sallies: the book is liberally strewn with canny quotes from fighting folk such as Mao Tse-tung and Che Guevara, he talks knowledgeably about fellow ‘troops’ making ‘sorties’ and ‘strikes’ in the middle of the night to cause ‘shock and awe’, and he recognises the vital importance of propaganda – especially blogging and other social media – in winning hearts and minds.

The book - a comfortable size which uses photographs well and has attractive endpapers - is divided into two sections, The Movement and The Manual. The first part explores the philosophy behind nipping out in the middle of the night to turn untended urban roundabouts, unloved medians and even Guantanamo Bay into small oases of delight. Reynolds also gives us a whistlestop tour through the movement’s history from the time of the 17th century Diggers (hats off to Gerrard Winstanley) through the turbulence of flower power to the posturing of millennium protestors.

In part two he gives general advice on what to plant, where to plant it (or in some cases, lob your homemade seed bomb) and what to wear. I suspect much of the horticultural part of this section will not be a revelation to most of the Garden Monkey’s readership, but for the many quite keen yet spectacularly ignorant gardeners such as myself it is very useful indeed.

There’s much more to this call to arms though. Despite largely positive notices in the national press, reviewers seem to have largely missed or ignored a central aspect of this book. Reynolds himself claims that guerrilla gardeners’ main enemies in the 21st century are scarcity and neglect, Dickensian evils not usually associated with gardening handbooks but which he believes require radical solutions. While he specifically states that his warriors should act legally, On Guerrilla Gardening feels like a handbook to non-confrontational campaigning and a manifesto for social change. What we plant is important, he argues, but so is why we plant it, whether it’s for aesthetic, economic or health reasons. It’s not surprising to discover the title and chapter headings are set in a type designed by William H Page, not only a lover of ornamental gardening but also a community activist. For this reason, it’s likely to find a place on my bookshelf between Tom Hodgkinson’s How To Be Idle and Antonia Swinson’s You Are What You Grow.

Thanks Alex - More on Guerilla Gardening can be found here
Posted by The Garden Monkey at 16:49 2 comments:

Is there a book that you really covet?

The target of my longing is Mabberley’s Plant Book.

And if I stopped buying books for a couple of months (as if!) I could easily put the necessary McGarrett aside.

And it certainly not really a lot of money compared to the amount I want it.

So why don’t I just buy it?

Well sometimes the pleasure is all in the desire.
.
Posted by The Garden Monkey at 14:57 2 comments:

Laetitia Maklouf, one of the team in C5's new garden programme is described as an author.

Her book isn't out yet (unless she has an earlier book on handbags that I'm not aware of).

Which made me wonder at what point do you become an author, or entitled to call yourself one?

After publication sure, but what about during, or before?