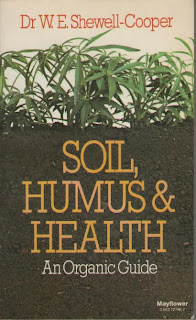 I must be getting old. Not only did I buy this book recently believing it to be a Penguin Handbook - which it isn't, even a superficial examination would have told me that, but I had been reading it for a little while before I realised that the plant on the cover was cannabis.
Since the book dates from the 1970s presumably the idea was the make it attractive to hippy pot heads. It does seem rather incongruous though on a book by someone who'd been writing gardening books since the early 1930s though.
Posted by The Garden Monkey at 12:15

I found out the other day my blog's been linked to from a cannabis growing forum. I didn't realise my air pots test last year was so anarchic ;)

Was under the impression that growing cannabis is illegal. How strange then, that one can write and sell how to do it. I'm wondering if I might make my fortune after all with a handy little book - 'Beginners Guide to Murder and Robbery'.

Growing cannabis is illegal - at least in the UK.

As for writing how to do it - I doubt that is illegal.

Mr S-C's book - despite the cover -has not even the vaguest hint how to go about it. It does have some good detail on compost heaps tho'.